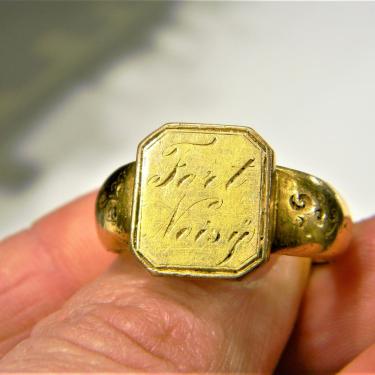 between 1870 and 1871 Germany lay siege to Paris and this ring belonged to a soldier who served within the walls of Fort de Noisy.
On January 19, 1871, a day after William had been crowned kaiser (emperor) at Versailles, Trochu assaulted the Prussian positions at Buzenval. Though Trochu took the village of St. Cloud, his supporting attacks failed, leaving his position isolated. At the end of the day Trochu was forced to fall back having taken 4,000 casualties. As a result of the failure, he resigned as governor and turned command over to Vinoy.

Though they had contained the French, many in the Prussian high command were becoming impatient with the siege and the increasing duration of the war. With the war adversely affecting the Prussian economy and disease beginning to break out on the siege lines, William ordered that a solution be found. On January 25, he directed von Moltke to consult with Bismarck on all military operations. After doing so, Bismarck immediately ordered that Paris be shelled with the army's heavy Krupp siege guns. Following three days of bombardment, and with the city's population starving, Vinoy surrendered the city. In the fighting for Paris, the French suffered 24,000 dead and wounded, 146,000 captured, as well as approximately 47,000 civilian casualties. Prussian losses were around 12,000 dead and wounded. The fall of Paris effectively ended the Franco-Prussian War as French forces were ordered to cease fighting following the city's surrender. The Government of National Defense signed the Treaty of Frankfurt on May 10, 1871, officially ending the war. The war itself had completed the unification of Germany and resulted in the transfer of Alsace and Lorraine to Germany